Travels with Leonard by Eleanor Lerman

By the time I got to high school in 1966 I was out of my mind. My mother had died; my father had gotten married again, choosing a woman who became the quintessential evil stepmother; and I had a schizophrenic stepsister who drew giant evil eyes on the living room walls. My father's reaction to the madness of our family life was to walk into the room where my stepmother, my stepsister, and I were all screaming at each other and say, "Now, now, let's all go watch Wheel of Fortune and everything will be okay." Perhaps that's where I learned that telling a story was a way to save my own life, but I think I know who really taught me that lesson. It was Leonard Cohen.

Before I found his work though, I started running around in the Village. I knew all the hidden gay bars, and all the straight hippie dives, and I started writing about my life as a fourteen-year-old in these now long-lost places. I remember handing in a sheaf of poems to my high school English teacher and he said something to the effect that while my work was good enough, I couldn't read any of it to the class because it would scare them. They were all nice kids living nice, normal lives and they didn't need to hear about my not-so-secret life in the sex-drugs-and-rock-n-roll counterculture.

Now, believe me, I was gratified to be a certifiably scary person. Why not? I was angry and out of control and my developing idea of becoming a writer seemed such an impossibility that I was ready to tear up the world. Poetry had taken hold of me but I had no idea of what I was doing and I didn't think anyone could help me. I had no intention of going to college because I was unteachable, unruly, ready to become a runaway, to fling myself into the nearest void and never return. And then one day, around the time I was sixteen, this happened:

Loving you, flesh to flesh, I often thought
Of traveling penniless to some mud throne
Where a master might instruct me how to plot
My life away from pain, to love alone
In the bruiseless embrace of stone and lake.

Lost in the fields of your hair I was never lost
Enough to lose a way I had to take;
Breathless beside your body I could not exhaust
The will that forbid me to contract, vow,
Or promise, and often while you slept
I looked in awe beyond your beauty.

Now I know why many men have stopped and wept
Half-way between the loves they leave and seek,
And wondered if travel leads them anywhere--
Horizons keep the soft line of your check,
The windy sky's a locket for your hair.


This is the poem that saved me from becoming a lost soul because it taught me the art, discipline, and technical skills I needed to begin learning how to write poems that were something more than just stabbing at a piece of paper and describing how angry and crazed I felt. It's been something like fifty years since I first read "Travel" and I have never achieved anything as nearly as wonderful and perfect as this poem, which may be why I go back to it year after year, even in the years that I'm writing more fiction than poetry. It's my touchstone, my secret, my saving grace. Whenever I'm sitting on my purple couch -- my version of a writer's office -- with my laptop open, thinking, I don't know how to do this anymore, it's too hard, I have no ideas, and what makes me think I'm really a writer, anyway? -- I pull my decades-old copy of The Spice Box of Earth from my bookshelf and read this poem. Sometimes I read it out loud to myself. It always makes me feel better. It reminds me of the crazy, sad, angry girl I was -- the one still inside me that needs to be soothed -- and how she thought, now I know how to save myself.

I first read "Travel" on a bus. I had bought The Spice Box of Earth in a drugstore in the half-deserted beach town where we lived when I was a teenager. The book was in the kind of spinning book rack they used to have in pharmacies and dime stores, and it caught my eye because I knew Leonard Cohen from “Suzanne,” a song of his that I’d heard on the radio. I thought Cohen was a singer and had no idea that he was also a poet. So I bought the book and took the bus home. By the time I got off at my stop, my life had changed. Up until that moment, I had thought poetry was incomprehensible nonsense written by dead old men and women in bonnets. But Cohen’s poem, “Travel,” which was one of the poems in the Spice Box collection, was like a message to me, a revelation and a how-to manual all wrapped up together. Because it was written in the kind of every-day language I heard in songs—maybe not in the way people actually spoke to each other, but certainly, in the way they sang on the FM radio stations I listened to in those days, and at night, when my headphones carried the music directly into my brain. I was saturated with music when I was a teenager, but after I read “Travel,” I was saturated with Leonard Cohen’s poetry, as well.

Oh, that poem is so full of love and longing and grief. Underneath all my savage anger, I was still just a kid, full of longing and greatly in need of love. Each word of Cohen’s poem resonated with me. But “Travel” is not simply a path for a lonely teenager to follow into a life of writing. It stands by itself as the creation of a master of words, a man who knew how to infuse three stanzas with perfectly chosen words that create atmosphere and deep feeling. Think about “the bruiseless embrace of stone and lake,” and you can hear rushing water in a cold stream and then think about how you might float among stones in a lake and not be harmed but rather embraced by water and sky as you “plot [your] life away.” Who hasn’t, at one point or another, wanted to give themselves up and drift away?  (And isn’t that the perfect antidote to wanting to hurl yourself into the dark, never to return?) However, the real master class offered by this poem is in the last lines. Read the first three…

“Now I know why many men have stopped and wept
Half-way between the loves they leave and seek,
And wondered if travel leads them anywhere–“

…and then note how Cohen suddenly veers off in another direction, as if he’s been interrupted by his own musings, his own prayer.

“Horizons keep the soft line of your cheek,
The windy sky’s a locket for your hair.”

It’s in that sudden change of direction, that unexpected turn from a despairing thought about lost love and wondering if travel leads anywhere—meaning, does life itself lead anywhere we want to go?—to a gentle, forgiving reminder that the sky and the wind can remember the consolation of love, even when you feel you can’t, that taught me the importance of learning how to end a poem. It can’t just fade away, it has to catch you, it has to leave you with a feeling that you absolutely know what the poet was feeling when he wrote it and what he wanted you to feel, too.

So that’s how I learned to write. Or maybe what I should say is, that’s how I began to yearn to write. It’s because I thought I understood that one poem—the feeling that made it, the artistry that completed it, the technique that tied it all together—that I wanted to follow Leonard Cohen on his travels. Follow the words he left behind like breadcrumbs. That one poem showed me how I could start my own travels through my life—and more importantly, my life as a writer—I began to calm down, to focus my wild thoughts and begin to rein in my wild ways. It took years and years, and the process of balancing my feeling of being an outsider (outside of whatever that nice, normal life my teacher alluded to years ago actually is) with taking some joy in the fact that as I get older and older, I get better and better at my work.

Leonard Cohen is gone now but I’m still following the trail. I lose my way a lot (really, a lot), but I just have to go back to The Spice Box of Earth to look for the courage to sit down again on the purple couch, look off into the windy sky, and keep trying to travel on. 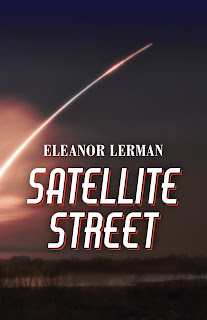 Eleanor Lerman is the author of numerous award-winning collections of poetry, short stories and novels. She is a National Book Award finalist, the recipient of the 2006 Lenore Marshall Poetry Prize from the Academy of American Poets, and was awarded a Guggenheim Fellowship as well as fellowships from the National Endowment for the Arts for poetry and the New York Foundation for the Arts for fiction. In 2016 her novel, Radiomen, was awarded the John W. Campbell Prize for the Best Book of Science Fiction. Her most recent novel, The Stargazer's Embassy, received an American Fiction Award from American Book Fest in 2018.