In the summer of 2013 an agent sent us Eleanor Lerman’s manuscript Radiomen, and by the time I finished reading it, I fell in love with her. It wasn’t until January, 2015 that we published it, and clearly others fell under Eleanor’s spell. Blackstone Audiobooks published an unabridged audio book at the same time. It was shortlisted for the prestigious Chautauqua Prize. It was also a  finalist for The Lascaux Prize in Fiction, as well as a finalist in Foreword's Indiefab Book of the Year. Barbara Hoffert, the Editor at Library Journal reviewed it as part of a roundup entitled “13 key spring titles for readers looking beyond the best sellers list.” A few excerpts of early laudatory comments follow:

“Though Lerman is a Lenore Marshall Poetry Prize winner, don’t expect a ‘lyrical’ read; she carries over her terrific narrative style into Lerman’s heroine, the nicely drawn Laurie, a bartender who declares, “I just wasn’t a mainstream person.” No surprise; when she was a child her Uncle Avi tried tuning in to pulses from life out there somewhere, and she seems to have seen an alien that haunts her dreams. For sci-fi fans looking for engaging backstory and literary fans seeking an escapist edge.”   —Library Journal

“Poet Lerman’s second novel is both a sharp send-up of Scientology and an intriguing aliens-among-us tale.”
—Booklist

“This entertaining tale leaves readers wondering if there might be life out there.”  —Publishers Weekly

“Deft storytelling merits willing suspension of disbelief. If you go along for the ride, it won’t disappoint.”
—The Fredericksburg Freelance–Star

“This is a rollicking yarn. Yet at the end of any good book what readers ask themselves is, ‘What did it all mean?’ and, more importantly, ‘What does it mean to my life?’ These are questions Radiomen asks in multiple ways.” —New York Journal of Books

“This odd, compelling novel shows its author’s skill as a poet. She knows how to create original similes that effectively convey the ominous and depressive mood of this strange but absorbing tale. It may be science fiction, but, hardly a predictable or typical example of the genre. It may well appeal to those who think they never would read such pop lit and enjoy it." —Joan Baum, NPR reviewer

But enough validations. My passion for Eleanor’s writing has to do with her immense gifts as a wordsmith, which I think are abundant in The Vampire’s Inspiration. 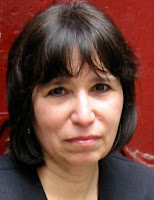 “I’m a vampire. Of sorts, anyway. It’s because I’m a writer that I live by being a vampire. Alone, before dawn or up late at night—years ago, with a yellow pad on my lap and now, staring into the electric glow of my laptop screen—I am often at a loss for how to start my work. If I’m in the middle of writing something, then I’m okay because I probably have a general idea of where I mean to end up.  But if I’m trying to start something new—a poem, a short story, or, as in recent years, a novel—then I’m usually standing on the  proverbial lonely road looking off into the darkness and having no clue what direction I should be traveling. Or if I should be traveling at all. (That fear is always the writer’s companion, or it is, I imagine, for many of us: that there is no next poem, no next story; that finally, the well has run dry.)

“That is the point at which I know it’s time to go open someone’s veins—meaning, some other writer. I suppose it would be better to say, “I look for inspiration,” so we can pretend that’s what I said.  When I was much younger, the hot afternoons of an entire summer passed by outside my tiny apartment in the Village while I read Leonard Cohen and absorbed him into my bloodstream. I studied the way his lines broke, where he placed commas, how he wrote stanza after stanza and then veered off, in the last few lines, to some unexpected conclusion that left you gobsmacked (thank God for cable television; I sucked that word out of the mouths of cynical detectives in British police procedurals). Then I went even further: in imagination, I followed him through the streets of his city, Montreal, and his island, Hydra, where he went to have his romances. I read his early novel, Beautiful Losers, and had to stop and think about how language can stretch into infinity when I came upon his description of a woman’s ear as a beautiful, curving seashell.  Leonard Cohen sustained me for years; I actually met him once and tried to tell him all this and while he was amused, he wasn’t really interested. He just kind of patted me on the head and said something that I remember as the equivalent of, You’re a nice girl. A real sweetie. I took that as permission to keep feeding on his work and I still go back, from time to time, for another sip.

“But there came a point, about ten years ago, when my magic Leonard Cohen-with-a-hint-of-James-Tate-and-a-twist-of-Richard-Brautigan wasn’t working anymore. It was, I think, because I had aged out of the wind-blown romanticism of young poets and blown right past the genteel cynicism of older novelists. I was older now myself—probably in my fifties when I hit a wall; I am now sixty-four—and had to go out hunting again for someone to help me make my way further down that dark road.

“And I found him. So now, to the list of people I bless, I have added Whitley Strieber, the author of many books about his personal alien abduction experiences, among other work. (His most recent book is The Super Natural, “a new vision of the unexplained.”) Depending on what you think about his work, he’s either a great science fiction writer, a witness/survivor of multiple and undeniably real alien abduction experiences, or simply a man with a fabulous imagination and an extraordinary way with words. Or all of the above. Actually, to me, it doesn’t matter; what does matter is the way he has described the ideas that guide his work because I can tell he’s out there on that road, too, stalking the things that are stalking him.

“Because Strieber has written so much about his alien abduction/encounter experiences, going all the way back to his childhood, interviewers are always asking him what he thinks the aliens want and what he believes they’re doing when they forcefully intrude upon people’s lives. Over many years, in different ways, he has given the same response, which is basically, How should I know?  You’re asking me, a human being, to describe something beyond human experience. How can I do anything but guess at the meaning, motivation, and even the beliefs of entities who are beholden to gods we can’t imagine, have experiences we can’t fathom, and come from places we don’t even believe exist?

“I happened upon these thoughts of Whitley Strieber’s at a time when my bag of tricks was empty. Briefly notorious in my early twenties for writing about gay sex, drug-induced passion, and suicidal love when Leonard Cohen’s sweetie pies didn’t write about things like that, I had followed those themes to a greater and lesser extent through four decades of work. But suddenly, all that had loomed so large to a young, then not-so-young woman became small. Unimportant. Done and done and done. Anyone (just about) can write a love poem. And almost all of us born in the middle of the last century and raised on Woodstock and the Rolling Stones have done drugs and then put them aside because they’re too expensive, too hard to get, or mess with our increasingly delicate insides and soaring blood pressure. (After all, you always have to be mindful of that Medicare deductible.) And how angry could I go on being since I now live comfortably in a condo near the beach and own a little white designer dog that I bought at a fancy puppy store because the rescue dogs at the shelters were too big for me to handle? I mean, what do I have to rail against except inevitable death and the fact that I understand nothing—zip, nada, nothing—about why I am alive?

“And that’s when Whitley Strieber came crashing through the ceiling. The alien spacecraft dropped him off just in time to help me begin to approach my work in what has become the only way I can still function, at least for now: in the framework of speculative fiction. Embracing Strieber as a blood brother has helped me see this kind of storytelling as totally and completely free and open-ended; a new road to follow that makes the darkness deliciously inviting. By saying some version of this: Yes, indeed, mysterious stuff is happening out there beyond the paychecks we have to earn and the schedule of the commuter trains we have to ride to our jobs and the terror of a Donald Trump presidency, and you can say anything you want about it because no one really knows what’s going on. No one knows on this planet; maybe in this universe. Maybe they know in some strange elsewhere, but not here, and not us—Strieber bit back at the strictures of what to me had become the constraints of the everyday, of human limitations and the hard stop of mortality and, in doing so, gave me permission to speculate on the larger things. The unknown things, the mystery realms. And for that, I am deeply grateful.

“So the crazy, dangerous, love-smacked girl learned to masquerade as an older lady with a little white dog on a leash, parading through the neat little beach town like a proper citizen while enigmatic universes and demon-eyed watchers from beyond the stars are actually what I have in sight. While a Godzilla-of-the-mind stirs up an old surfer’s reunion with his longboard and keeps his big dog awake at night. (That part about the surfer and his Godzilla dreams sounds like a great story, right? I hope so, because it’s what I’m working on now.) So let me draw my cloak around my hunched shoulders, polish my little fangs and see what Whitley has been saying lately. It might help me with the next chapter of the book. Certainly, it will turn a few pages in the next chapter of what is still (Still! As long as I can write…) my secret, scintillating life.”

I welcome any comments below, emails directed to me (shepard@thepermanentpress.com), or to Eleanor (elerman1@optonline.net).