KURT VONNEGUT, BERRY FLEMING, AND THE AMERICAN ACADEMY OF ARTS AND LETTERS

Twenty-seven years ago Judy and I discovered Berry Fleming (or, more exactly, he discovered us). He was about to turn 88, and under his own imprint, Cotton Lane Press in Augusta, Georgia, was reprinting some of his earlier novels. Before I had ever read Berry, I should mention that the four writers who had the greatest influence on me were William Faulkner, Gore Vidal, Norman Mailer, and Kurt Vonnegut, all of whom were members of  The American Academy of Arts and Letters. Faulkner was inducted in 1939, Mailer in 1967, Vonnegut in 1973, and Vidal in 1999.

Over the next two years we went on to republish 10 of Berry’s earlier books and two new ones. We also filmed him, producing a DVD of one of the giants of American Literature. At the time, driving a green Porsche convertible, he still zipped around to his office, writing daily on his typewriter with one finger in a hunt and peck manner.  But Berry wanted us to bring these books out in relatively rapid order, as who was to say how long this vital and creative guy would keep going. So we released four books at a time from 1988 midway through 1989, all of which are listed in our catalog. And we discovered that some of his lauded masterpieces, Colonel Effingham’s Raid, The Make Believers, Siesta, and Lucinderella gained the same accolades all over again . And the new ones, Captain Bennett’s Folly and Who Dwelt by a Churchyard, were also gaining followers from reviewers on NPR and from dozens of major newspapers and journals.


On June 18, 1973, Jimmy Carter signed a Resolution passed by the Georgia State Senate proclaiming that “His works have been hailed by critics with comparisons to those of Welty, O’Hara, and Faulkner. He is one of America’s greatest authors,” With this new resurgence, Professor William Doxy at UNC Chapel Hill in March 25, 1989, nominated Fleming for the Nobel Prize for Literature given by the Swedish Academy. This possibility never came about because Berry died less than 6 months later, thereby becoming ineligible.

Before his death I had the idea that Fleming deserved to be a member of the American Academy of Arts and Letters, and that could come about only if he were nominated by an existing member of the Academy. At the time I was in contact with Kurt Vonnegut and Norman Mailer and I wrote to them both about this. Mailer said “my backing wouldn’t help since Hortense Calisher is now the President of the Academy of Arts and Letters and she and I are not compatible, so it would do Berry Fleming’s cause no good if I were to propose him for anything.” 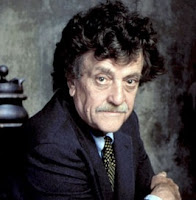 And then I received the following letter from Vonnegut, a neighbor of mine here in the Hamptons when not in the city. It’s quintessential Vonnegut, spoken from the heart of a man who attempted to resign from the Academy on two occasions, and who surely knows his way around it.

I congratulate you on your efforts to get deserved recognition for the novelist Berry Fleming, who is, I’m sure, as good as you say. So you and he are surely on my conscience. At the same time I feel helpless, since the American Academy and Institute of Arts and Letters is much like an Exxon Tanker with the skipper dead drunk in the lavatory off the engine room. It doesn’t act the way it’s supposed to.

I myself no longer attend meetings because of its lack of maneuverability. Too many good writers  (and no doubt painters and composers and historians and architects and so on)  have gone to their graves believing that that they lacked that indefinable certain something which kept them from joining the cream of the cream. Irwin Shaw and James Jones and Richard Yates have failed to get in for a couple of maddening reasons at least:  first, poets campaign for each other like politicians, so that most of the writers honored are poets now, and second, painters and musicians and so on get to vote on writers, too, and have never heard of Yates and Fleming, and are often log-rollers, too. “If you’ll vote for an artist you never heard of in my field, I’ll vote for one I never heard of in yours,” and so on.

When Sinclair Lewis became the first American to win a Nobel Prize, the Academy and Institute asked him if he wouldn’t please become a member. To his discredit, he accepted.


I now say, and am not alone, that the Academy and Institute should not exist, since its main achievement is broken hearts.  Please give Berry Fleming my love.

COMING NEXT WEEK: a blog from Ivan Goldman, author of The Debtor Class. Be sure to read this iconic, and ironic, writer’s political take on events.

Marty
Posted by Marty Shepard at 11:58 AM