DANCING ON MY DESK

Paul Zimmer has received eight Pushcart Awards for his prose and poetry, and an Award for Literature from the American Academy and Institute of Arts and Letters. In 1995 he was given the Open Book Award by the American Society of Journalists and Authors. His book, The Great Bird of Love, was selected for the National Poetry Series by William Stafford. He has recorded his poems for the Library of Congress and was twice awarded Writing Fellowships by the National Endowment for the Arts, and has served as writer-in-residence at more than a dozen universities. He now writes about his first novel, published this past February. 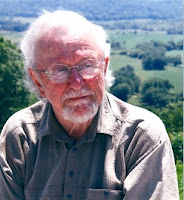 “My first book of poetry was published in 1967 just as I became assistant director of the University of Pittsburgh Press.  I had been working on poems for a dozen plus years by then.  Eventually I published more than a dozen poetry books and two volumes of essay/memoirs and they got nice reviews and some awards.

“Until I retired in 1998, I did my writing on my lunch hours and early in the morning before my family got up.  I worked for almost forty years as a scholarly publisher, eventually directing three university presses.

“For most of my writing life I had kept a novel going on the back burner as I scratched at my poems.  I must have started work on at least half a dozen novels over the years, eventually losing interest in the manuscripts.  I did not have enough time to bring off this kind of extended writing.  Perhaps I was practicing...

“When I retired in 1998 I had time to work steadily at fiction along with my poetry.  It was wonderful—at long last I could work for as long a I wished.  I had several false starts, but eventually grooved in on three characters—two of them quite old, the third a mean and heartless son of a bitch.  I realized more about tension and narrative in prose, and the script began to sail. I worked on it for at least a half dozen years.  It got big and then I shaved it down again.  Eventually I decided to try it with some publishers.  It is called The Mysteries of Soldiers Grove.

“Judith Shepard had given me some encouragement about an earlier prose submission, so I sent it to The Permanent Press as well as the other publishers.  It wasn't very long at all until one Saturday night as I was having my weekly cocktail with my wife, the phone rang.  It was Marty Shepard calling from Sag Harbor, New York to say that The Permanent Press would like to publish my novel.  They wanted to do a hardback edition, so it was going to be a REAL book and not some phantom thing pulsating out there in a great electronic void.  I started dancing on my desk...and that is a precarious thing for an 81-year-old man.

“But a novel at my age!  And, you know, I think it is pretty damned good.  Is that not worth some cavorting?  The early reviews have been heartening. How very nice it all is.  I hold this clothbound novel often in my hands.”

THIS IS THE FIRST in a series of four blogs written by first novelists. Should you want to reach Paul Zimmer, you can contact him at sego@mwt.net.  On December 2, Kathleen Novak will write about her debut, Do Not Find Me.

Please post your comments as well on this cockeyed pessimist weekly blog. If you need to reach me, my email address is shepard@thepermanentpress.com.

Marty
Posted by Marty Shepard at 9:35 AM