MONSTERS AND MEMORY by Eleanor Lerman

I’ve been a great admirer of Eleanor Lerman as a writer, poet, blogger and brave soul who has overcome serious illness without complaint, and who can turn adversity into lyrical memoir, such as this current blog. There is incredible honesty in her work and it’s been a privilege to have published her and count her as a good friend. I think you will be equally impressed by this piece.  —Martin Shepard
*         *         *

Monsters and Memory
by Eleanor Lerman

In 1970, when I was eighteen, I answered a want ad in the Village Voice that said, “Person needed to sweep up in harpsichord workshop.” I figured I could do that job; after all, I had grand ideas about being a writer and scorned the alternate path of going to college or getting a “real” job which, at that time, would have meant putting on a demure dress and typing letters in an insurance office. (Well, that’s how I pictured a girl’s life in those years and what my typing course in high school had prepared me for.) So, I took the A train from my parents’ house in Far Rockaway to the Village, got off at Sheridan Square, walked down to 161 Charles Street near the Hudson River and—not that I knew it then—found the place that would change my life forever. 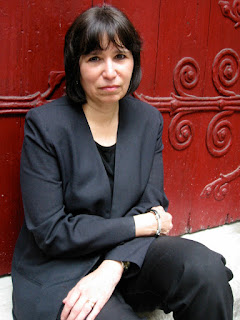 That day, Michael Zuckermann hired me to work at Zuckermann Harpsichords and also gave me the keys to a tiny apartment upstairs so I became not only his employee but also his neighbor and eventually, his friend. Yes, I swept the floors but I also made harpsichord kit parts. I drilled pin boards, spun wire into coils, affixed tongues into the plastic jacks that help pluck the harpsichords’ strings. By the time I was nineteen I was managing the place so Michael could be free to pursue his real passion: making movies that starred his girlfriend, Rosalie, running naked down Charles Street at night as a tape-recorded recitation of “She Sells Sea Shells” played in the background. The reason for this eludes me now, but I’m sure it all made sense at the time.

Michael once told me that he hired me because I had a soulful look, which meant I had achieved exactly the look I was going for: long hair, kohl-rimmed eyes, rags and glitter. Sort of half Cher, half Egyptian tomb painting. What better qualifications could anyone have for working in a harpsichord kit factory at that time, in those years, in that place?

So, Charles Street and Charles Lane behind it, along with the harpsichord workshop and all the people I met through that place—including a movie producer who lived in a carriage house on the Lane along with art historian wife—shaped who I was and who I am. I didn’t realize it then, of course, but I know it now. I was an angry, resentful, unsophisticated and uneducated kid with a dead mother and a fractured family so I didn’t know how to really relate to any of the people I met, but I did know how to watch them from somewhere deep inside myself. The people whose circle parted just a little to let me in—movie stars, Great American Writers, once-famous musicians suddenly and famously down-and-out, comedians on the rise, but mostly the writers, all men, all extraordinarily talented—filled me with jealousy (I wanted to be them), with rage (I hated the idea that I believed I couldn’t be them, though they were all extremely kind and encouraging to me), and even, once in a while, inspiration (what the hell, if some of these acting-out-all-the-time and raging-drunk types could write books, then why not me, too?). Anyway. When I was 36, I moved away from the Village and all things Zuckermann. There were a lot of reasons, including the fact that I thought I was failing as a writer (I had published two books of poetry but couldn’t find anyone to buy a novel I’d written) and so it was time to give up and try to live a normal life. That didn’t work out because I am not a normal person—at least, not the demure dress and typing kind of person who I thought I was sentencing myself to become by leaving the Village, moving to Queens, and getting a more conventional job. So, years got lost, bad decisions got made, etc., etc. Lots of time passed. Lots.

But actually, all that is prelude to what I really want to write about here, so let’s start by my saying that now, as it turns out, I am not quite the failure I thought I was. I am still not where I want to be as a writer but, at the age of 65, I have finally learned a few things about how to do my job better, be more discerning about the angels and oddities walking through the front door. And one of the things I’ve learned about my job is that different people who do the same thing do it differently. Some people who write stories start with developing their characters, some start by working out the plot, some just begin with a particular sentence and follow where it leads them. For me, stories start with a place. In my last novel, The Stargazer’s Embassy, Greenwich Village was an important setting for a good part of what happens. In a book I’ve just begun working on, the story began to reveal itself to me when I was riding on the Long Island Railroad and through the window, glimpsed a winding, lonely looking street that seemed to lead off to nowhere. I was on the train because, after a sudden and near-fatal illness, I was in the process of recovery, which involved traveling to a physical therapy facility some distance from the small Long Island beach town where I live. So, day after day, on the train, that deserted street with a fence on the corner and an empty lot lined by tall cattails, began to exercise a kind of pull on me. It was autumn; the sky was gray and mackerel-striped. The wind pushed around the clouds above the street and blew sand across the weedy lot. In my mind, that glimpse of scenery became a place called Satellite Street and it became mine.

So, back home, sitting on my purple couch, in my imagination I began to walk down Satellite Street and what I found there was a woman with short-term memory problems and her friend, falling into dementia, who can only remember experiences from long ago. There are a lot of things I intend for these women to do, but one important task is to make a brief visit to the Village because I want them to help me say good-bye one last and final time.

Maybe it’s because as we—as I—get older, the longing for people and places in the past grows stronger, as if by going back to those years we could cast off all the bad choices, the disasters, the illnesses and grief that came to visit afterwards. But for me, I know that I have to find another way to live and to write that is not constantly referencing the past. My life was pretty scary for a while but it’s much better now, and I have to find a way to work from that better place.

In my new story, a woman named Mara develops a mild obsession with the movie Godzilla—the old one, from 1956, with Raymond Burr. Mara thinks, at first, that her obsession stems from an affinity she feels with Godzilla’s atomic rage: she’s been very sick (who can she represent here, hmmm?), she’s lost her job, is living on Satellite Street in a middle-of-nowhere area surrounded by marshy inlets and highways to better places. She’s also very angry about the turn her life has taken and so she’d like to stomp out a few cities herself, smash up some skyscrapers and blast away an army of puny soldiers with her radioactive breath. But what she’s going to find out is something quite different: that while it takes a monster’s strength to survive this life, it also may require a monster’s heart—full of wandering atoms and stardust and ancient memories about human creation—to stomp on into the future. Wounded, maybe, but still breathing fire.

So, on I go. On we go. I recently received an email from someone I’ve never met, telling me that he’s a friend of Wallace Zuckermann, the original owner of Zuckermann Harpsichords and the older brother of my boss/friend Michael Zuckermann. Michael passed away many years ago but Wallace, who I didn’t know well, and whose real name, apparently, is Wolfgang, is an elderly fellow now, living in Paris in near poverty. (I know, that sounds like a novel all by itself.) The person who wrote to me is trying to get some folks together to find a way to chronicle Wolfgang/Wallace’s life (he was born in Germany, became an American soldier, created the harpsichord kit business and wrote a volume of bizarre, erotic fairytales which he once sent me and I am now trying to find among my books) and I told him I would help, if I can. Such an odd time to receive a communique from my Zuckermann-addled past but maybe it’s just the right time, as well.  Maybe it will help me say good-bye in my story, knowing that the girl with the kohl-rimmed eyes still gets to live a little longer, roam around her old haunts for a while longer and then go to sleep. Like Godzilla, she can drowse under the sea until roused again to stalk a new world. Angry. Happy enough. Certainly strong enough. Finally free.

Eleanor Lerman is the author of Radiomen (The Permanent Press, 2015) and The Stargazer’s Embassy, which will be published by Mayapple Press in July.
Posted by Marty Shepard at 5:19 PM